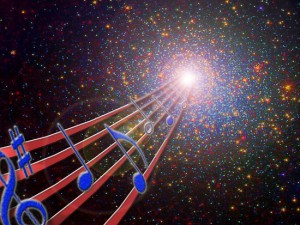 Music is primordial. It has been the life blood of existence before any known melody was ever penned. The music that inspires songwriters goes back long before writing – it is Nature’s music. Sound has been organizing itself into music since the dawn of the universe.

The word universe means “one song.” Recently, NASA using advanced mathematical principles based on the orbital velocities of the planets have equated different sounds with different planets only to discover that they seem to be harmoniously related. Scientists using contemporary technology have discovered the music of the stars. as well as the melodic musings of the oceans.

“The sky and its stars make music in you.” . . . Denderah Temple Wall Inscription Egypt

Music is an integral part of the creative process, and is not just restricted to harmonies made by us humans. At our deepest levels the music within us is inspired by the music of the natural world. In a sense, humans are like 3D printers, and our bodies are the mechanisms through which our souls print their music. We reorganize sounds into modern, lyrical melodies through our intrinsic relationship with nature.

Every creative story begins with sound. In the beginning was the word, then came light. I recently learned that the ancient alchemical formula for creation is “sound + intention.” It’s no wonder we’re in love with music. It’s where we came from. It’s what we are.

Every time we access our music storage and choose a particular song to listen to, our decision is based on sound energy. We know the power of music and we apply it accordingly. Our bodies know what we want and need, whether it’s soothing sounds of classical Bach or a riveting march by Sousa or a mind melting, get your butt in gear, Drake.

Before I do a presentation I like to listen to Santana to get my energy stirred up. The energy of Oye Como Va translates through me as upbeat and engaging – and that’s what my listeners get. If I listened to Gregorian chants, I would enter the stage with an entirely different vibe and the audience would feel that too.

Transformational sound goes back to our ancient roots. Along with setting a tone at an event, it’s considered one of the oldest forms of healing. Sound and music have played a predominant role in the early teachings of the Greeks, Chinese, Egyptians, North, Central and South American Indians. All ancient mystery schools taught their students to use sound as a part of healing. The body resonates with different tones to bring it into harmony and raise it’s performance.

Botanists have shared the living music from plants. Recordings of forests that have never been heard before, are now available through advanced technology. The “music” of plants and their interaction with other parts of forest life reveals a harmonious undercurrent of communication. Music for the songwriter can be heard in plants, water, wind, fire and in the earth itself. Remember the group Earth Wind and Fire? They must have been on to something.) There is never a shortage of inspiration for the songwriter.

We will find music in all places. A friend’s father, amateur musician and composer owned a printing shop. He would come home after closing shop, and sit at the piano where he would reproduce the sounds of his presses. He arranged those sounds into a variety of jazzy renditions that he claimed he heard coming from his printers throughout the day. He belonged to a quartet, and many of his songs made it into their repertoire and on stage.

Wherever the inspiration comes from, the gifts are unending. The human translation of sound into soothing melodies or hair raising riffs is ours to play with and in so doing, keep close to our souls. We own it, we love it, we grow from it and there’s more where that came from.

Leave a comment below – tell me how you use music to move you creatively.