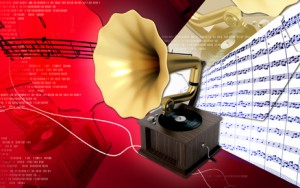 Frank Sinatra, Dean Martin, Gene Autry, Henry Mancini, Ella Fitzgerald and Andre Previn, to name a few, stepped out and entered the Grand Ballroom for the first Annual Gramophone Awards ceremony. Simultaneously, in New York other new Academy members were gathering to honor their fellow artists and music elites at a black tie dinner and Awards presentation. Touted as “Music’s Biggest Night” by Billboard magazine, it was easy to see that this was just the beginning of what would become a tradition for decades to come.


The origins of the Grammys came from the famous Hollywood Walk of Fame. While recording executives were being chosen for the Walk of Fame it came to light that there were far more who deserved to be recognized for their contributions to music and song. From there the National Academy of Recording Arts and Sciences was formed. They designed the Gramophone Awards to pay tribute to the highly respected and admired singer, songwriters of the day.

While only 28 categories were presented on that first Grammy Award night in 1959, on February 8th, 2015, 83 categories within 30 fields were awarded- resulting in over 7,500 trophies being handed out. A Grammy is given to:

Other awards are given for performance and production in particular expressive styles. Awards also include artwork and video that contributed to a musical production. Of course, every team member of each project is given a Grammy for the important part they played. You know – it takes a village . . .

Music is the universal language. Every emotion that humans experience can be portrayed in melody. From love and romance, to birth, to survival, to the great hunt, to celebration and death are all encompassed in sound. We’ll never run out of music, because we’ll never run out of creative, talented minds to interpret all that life encompasses. Music for songwriters will continue to feed us through the universal beat of heart and soul.

Leave a comment below – Who is your favorite music artist?